What Transpired on the Cross


Topic: What Transpired on the Cross


For the message of the cross is foolishness to those who are perishing, but to us who are being saved it is the power of God. 1 Cor 1:18


Jesus knows how to do the right thing and why the whole of heaven trust him to go on His mission. The papyrus fragment includes a quote from Matthew 3:16-17, and was the earliest witness to the text of the New Testament when it was discovered. What was found in Matthew 3:16-17 was - "As soon as Jesus was baptized, he went up out of the water. At that moment heaven was opened, and he saw the Spirit of God descending like a dove and alighting on him. And a voice from heaven said, “This is my Son, whom I love; with him I am well pleased.” This shows confidence in heaven on what Jesus could do. Like a football fans chanting "This is the best team in the world."


Jesus indeed delivered up to expectations as he did not disappoint heavens by accepting to die. Does not Scripture say that the Messiah will come from David’s descendants and from Bethlehem, the town where David lived?” John 7:42 so what transpired on the Cross? Jesus and Archangel Michael went to the realm of the dead in hell to take away Moses's body from the devil as a sign of salvation to humanity. Zechariah 3:1-3 confirmed it : "Then he showed me Joshua the high priest standing before the angel of the Lord, and Satan standing at his right side to accuse him. The Lord said to Satan, “The Lord rebuke you, Satan! The Lord, who has chosen Jerusalem, rebuke you! Is not this man a burning stick snatched from the fire?” Now Joshua was dressed in filthy clothes as he stood before the angel. This was later confirmed in Jude 1:9 and 23 "But even the archangel Michael, when he was disputing with the devil about the body of Moses, did not himself dare to condemn him for slander but said, “The Lord rebuke you!” 23 save others by snatching them from the fire; to others show mercy, mixed with fear—hating even the clothing stained by corrupted flesh.


Why was redemption for Moses body important. At the Mount of Transfiguration according to Luke 9:29-32 Moses and Elijah appeared to Jesus in glory. Likewise in Matthew 17:12 Jesus said "But I tell you, Elijah has already come, and they did not recognize him, but have done to him everything they wished. In fact, the law requires that nearly everything be cleansed with blood, and without the shedding of blood there is no forgiveness. Hebrews 9:22.


Jesus on the Cross, and the angels held their peace till his blood was spilled. The Armies of heaven were not allowed to fight. "About three in the afternoon Jesus cried out in a loud voice, "Eli, Eli, lema sabachthani?" (which means "My God, my God, why have you forsaken me?"). Matthew 27:46,. Jesus the Messiah was taken as sacrificial lamb to bring salvation to humanity and afterwards the angels began to rejoice.


And they sang a new song, saying:


“You are worthy to take the scroll
and to open its seals,
because you were slain,
and with your blood you purchased for God
persons from every tribe and language and people and nation.
You have made them to be a kingdom and priests to serve our God,
and they will reign on the earth.” Revelations 5:9-10

It is very important for a Christian to remember that on the same Cross a thief was saved in the physical and a Moses body was redeemed in the Spiritual to show the power in the blood of Jesus as a reminder to the Devil that their sins have been forgiven and hell is not people's home. If you are not born again, You must go to Jesus for the Cleansing power in His blood. All is empowered by Grace of God.
Prayer: Thank You Lord Jesus for your Grace and for healing blood on the Cross. I plea your blood in confirmation that I am redeemed by grace and hell is not my home. Amen. 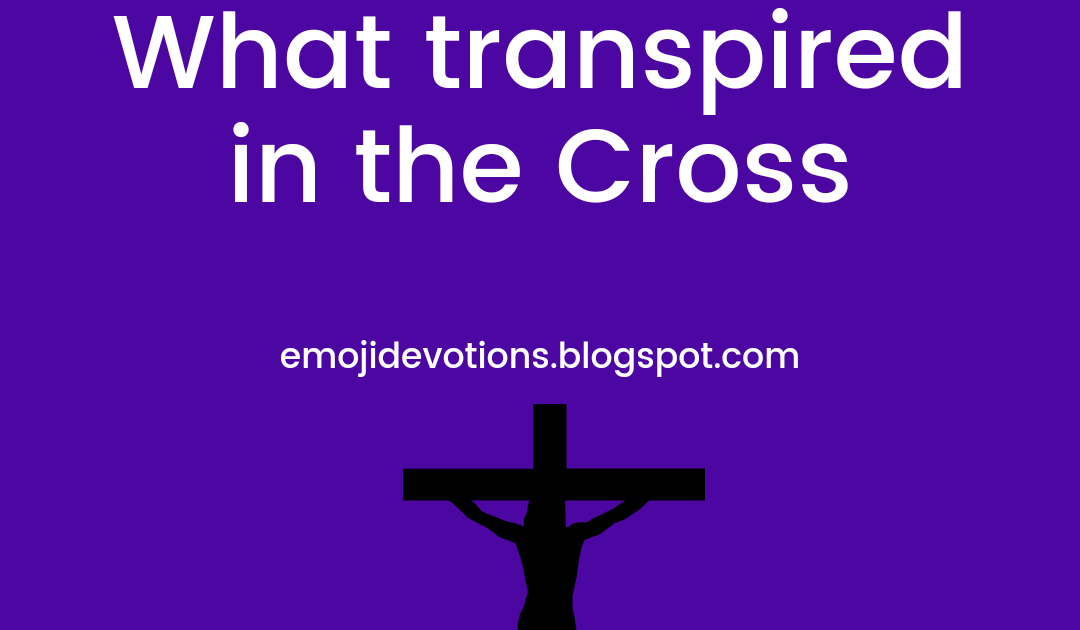 What Transpired on The Cross

An Emoji Devotions for Mon 3rd May, 2021 Topic: What Transpired on the Cross Highlight: For the message of the cross is foolishness to t...